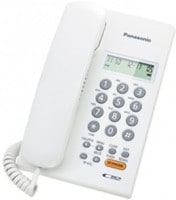 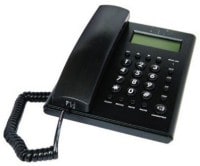 Landline Phones uses a certain technology for transmission which is the metal wire or optical fibre telephone line distinguished from a mobile cellular line, which uses radio waves for transmission. In 2003, the CIA World Factbook reported approximately 1.263 billion main telephone lines worldwide. China had more than any other country at 350 million and the United States was second with 268 million. The United Kingdom had 23.7 million residential fixed home phones.

The term landline is also used to describe a connection between two or more points that consists of a dedicated physical cable, as opposed to an always-available private link that is actually implemented as a circuit in a wired switched system (usually the public switched telephone network). So-called leased lines are invariably of the latter type; the implications of a land line in this context are security and survivability. For example, a military headquarters might be linked to front-line units "by landline" to ensure that communication remains possible even if the conventional telephone network is damaged or destroyed. Another example of this is in airports. All air traffic control towers have dedicated lines connected to the police, fire department, hospitals, army, etc. Deployed as a precaution in case of emergency, these can be used at any time.

Cordless phones became an option that bridged the affordability of a landline and he flexibility of a cell phone. Cordless phones offer freedom and mobility as they can be taken outside while users work in the yard or simply watch the children play. Cordless phones make it possible to go on with your daily tasks without worrying about missing an important call. Many newer cordless phone systems offer multiple cordless handsets that work off of one base without the need for additional phone lines. The downside of cordless phones, however, is general interference and the lack of service during a power outage.

Corded telephones are available in both desktop and wall-mounted models. Corded telephones are a more affordable option in landline phones, but they do not offer the flexibility of cordless phones. Many corded landline phones have a speakerphone option that allows a bit more mobility. Longer phone cords are another option for gaining mobility. The primary upside of a corded phone versus a cordless phone is the reliability during a power outage. When power is unavailable, a corded phone will continue to work.

Various Uses of These Phones

Many corded and cordless landline telephones come with a variety of options for individuals with special needs. For those who suffer from a hearing loss, phones with amplified sound are available. Phones with lights that flash when the phone is ringing are also available to help users with hearing loss. For individuals with vision problems, some phones have larger dial pads. Braille telephones have also been designed that offer large buttons with Braille on the keypads.

The use of landline telephones has plummeted in recent years. As more and more consumers use cell phones, many find it more convenient and less costly to replace their landline with their cell phone. Individuals with a small or fixed income are finding it necessary to cut their landline altogether to afford a cell phone they can have with them in case of emergencies. The downside of giving up a landline, though, is that if your cell phone is lost or misplaced, you may not have the ability to get help when it is needed.

Future of these phones

In 2004, only about 45% of people in the United States between the ages of 12 and 17 owned cell phones. At that time, they had to rely on landline telephones. In just 4 years' time, that percentage climbed to about 71%. That same year, 2008, about 77% of adults owned a mobile phone. In the year 2013, 91% of adults in the United States owned a mobile phone. Almost 60% of those with a mobile had a smartphone. A National Health Interview Survey of 19,956 households by the Centers for Disease Control and Prevention released May 4, 2017 showed only 45.9 percent of U.S. households still had landlines, while 50.8 percent had only cell phones. Over 39 percent had both.

In Canada, more than one in five of households use cell phones as their only source for telephone service. In 2013, statistics showed that 21% of households claimed to only use cellular phones. Households that are owned by members under the age of 35 have a considerably higher percentage of exclusive cell phone use. In 2013, 60% of young household owners claimed to only use cell phones. In the early 21st century, the landline telephone has declined due to the advancement of mobile network technology and the obsolescence of the old copper wire networking. Eventually these metallic networks will be deemed completely out of date and replaced by more efficient broadband and fiber optic landline connections extending to rural areas and places where telecommunication was much more sparse. Some see this happening as soon as the year 2025.

Top Brands that Sell These Phones

The Vtech cordless landline system is well known to standout as one of the best landline phones in India. This is according to the customer reports that were generated after in-depth surveys in the light of the prevailing circumstances. Customers agree that it is one of the handsets that you can rely on when shopping for the best landline phones on India online This is the best landline phone in India under 2000 that makes good use of the progress DECT 6.0 advanced technological innovation to enhance sound quality and range. It comes with three included cordless handsets together with an implied computerized voice mail. These features make it stand out from the other products that the market has to offer to its clients.

The Panasonic cordless landline system incorporates the noise reduction feature so that you don’t unmistakably fail to hear your phone calls even with the encompassing commotion. Retain a strategic distance from talking ID cautions to missed writing from the Link2cell Panasonic brand handset and keep your top cordless phone defendant of the couched USB port. With the message sending capability, you will be able to send recorded messages in a straightforward manner to your cell phone. The system has a computerized noting system that is able to record up to a maximum of eighteen minutes of messages. It’s an ideal choice for anyone who is looking for a cheap landline phone in India that employs the cordless technology. The good thing is that the phone is not deficient in any highlights that you could be looking for.

This is one of the best cordless phone in India that comes with a battery backup has a coordinated voice-mail that can make a recording of up to thirty minutes of massages. Regardless of the rich outline that comes with this system, this top landline phone in India remains exceptionally instinctive with the lit-up buttons are a very reasonable speakerphone that is included in the package.

This is obviously one of those long-range cordless landline phone in India that you will not mind keeping around your working environment. One thing you need to understand is that this landline phone works well in the United States, yet you have to use the included power voltage converter in connecting to it.